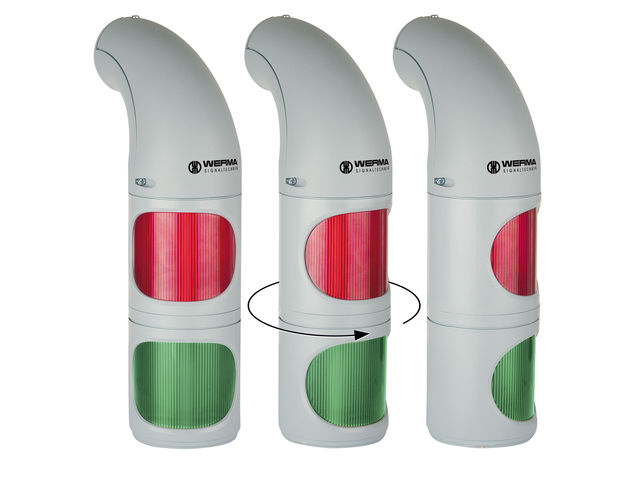 LED Beacon / LED Traffic Light in innovative design
WERMA has extended its successful program of optical signal devices with the addition of the new LED beacon and LED traffic light in an inno-vative design. The new beacons are available either as single LED bea-cons in red or as LED traffic light combinations in the colours red/green or red/yellow/green.

Innovative design for new fields of application
The new LED beacons combine a completely new traffic light form with a high degree of functionality and cost effectiveness. They can be de-ployed for a range of tasks within industry, automation and building ser-vices engineering. Thanks to the modern style and the attractive, innova-tive plastic housing, the signal beacons can also be deployed in fields where appearance plays an important role. They are especially suited for applications where the classical traffic light form is unsuitable, for exam-ple in the fields of access control, warehousing technology or in the lei-sure sector.

Choice of both clear and coloured lenses
The traffic light version of the new LED beacon is available with both col-oured or transparent lenses. In the version with coloured domes, the LEDs produce light of the same colour as the lens, this generates a more in-tensely coloured light signal.
On the other hand, the colourless lenses generate an unmistakable signal even in direct sunlight.

Check out all the products from category input/output components

Find your suppliers Complete your request and let our teams find you the best deals available. Find your future clients List your products and services to enhance your web presence and receive qualified enquiries.